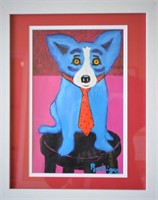 You can view and bid on all items at this link https://www.invaluable.com/catalog/m6kvvm23vr Fine Art Original Art and Attributed to by: George Rodrigue, Dali, Picasso, Andy Warhol, Banksy, Keith Haring, Le Pho, Peter Max, Jean-Michel Basquiat, Leroy Neiman, Frida Kahlo, Shane Bowden, Paul Aizpiri, Emil Schumacher, Joan Mitchell, Jackson Pollock, Yuri Tremler, William Littlefield, Everett Woodson, and More! In the manner of and limited editions by Gustav Klimt, Paul Gauguin, Richard Dieberkorn, Martin Rico, Philip Guston, Willem de Kooning, Hans Hofmann, Kurt Schwitters, Alfred Gockel, Henri Matisse, G Harvey, Charles Frace, Thomas Kincade, & more! Bronze Sculptures. Fine Estate and New Genuine Jewelry! Great Collection of Persian Rugs! Collectibles: Signed Hugh Hefner Playboys, Signed Stan Lee Spiderman, Signed Paul McCartney magazine, Signed Bill Clinton pic, 62 Comic Books, & more! Sports Collectibles: Signed baseballs, photos, and limited edition art. by Tiger Woods, Phil Mickelson, John Smoltz, Greg Maddux, Gerald Ford, Peggy Fleming, Freddie Freeman, Tom Glavine, Pete Rose, Phil Neikro, & More! Great collection of Antiques, Fine Furniture, and Accessories. AUCTION HOUSE TERMS REFERRING TO ART: The auction house believes that the artist him/herself made this work as a replica of their own, previous original. Attributed to: The auction house finds it likely that this is an original work, but is not prepared to guarantee this. His Studio. The auction house believes that the work was made in the artist's studio and possibly under their supervision. His circle. The auction house believes that the work was made by another artist but during the lifetime of the named artist and in their manner. Follower of. The auction house believes that the work was done in the manner of the named artist, during their lifetime or later. In the manner of. The auction house believes that the work is done in the manner of the named artist but after their lifetime. After. The auction house believes that the work was made by another artist, based on an original work by the named artist. All property is sold AS IS and without recourse. Four Seasons Auction Gallery., for itself and as agent for the seller, makes no warranties or representations of any kind with respect to any Lot., Buyer agrees that in no event shall Four Seasons Auction Gallery be held responsible or liable for the correctness, description, genuineness, authorship, attribution, provenance, period, culture, source, origin, value, or condition of any Lot. Nothing said or done by Four Seasons Auction Gallery shall be deemed a warranty of representation or an assumption of liability by Four Seasons Auction Gallery. Bidding in this auction is a binding legal agreement with Four Seasons Auction Gallery. We encourage you to set an appointment for yourself or an expert to preview any item you are considering buying.
Location
Gainesville, GA
Details
Auction Details
Catalog
View Catalog (289 Lots)
Single Page

No bids found for this item

In the case of a tie bid, precedence is given to the earliest bid

Your Max Your Bid

Your Max Your Bid

Your Max Your Bid
Click to add notes.
Notes saved

Get a Shipping Quote
Shipping

Email Privacy Policy We have created this email privacy policy to demonstrate our firm commitment to your privacy and the protection of your information. Why did you receive an email from us? If you received a mailing from us, (a) your email address is either listed with us as someone who has expressly shared this address for the purpose of receiving information in the future ("opt-in"), or (b) you have registered or purchased or otherwise have an existing relationship with us. We respect your time and attention by controlling the frequency of our mailings. How we protect your privacy We use security measures to protect against the loss, misuse and alteration of data used by our system. Sharing and Usage We will never share, sell, or rent individual personal information with anyone without your advance permission or unless ordered by a court of law. Information submitted to us is only available to employees managing this information for purposes of contacting you or sending you emails based on your request for information and to contracted service providers for purposes of providing services relating to our communications with you.

The email address {0} has been subscribed to the email list.

Oops, there was a problem.

I was unable to add your email address to the email list. Please check your address and try again.

Oops, there was a problem.